We baby-boomers ought to be ashamed.  It is incomprehensible to me that any member of my generation (U.S. baby-boomers, b. 1945-1964) could look at these pictures and not feel that they have failed in one of their most fundamental human responsibilities.  The picture above shows the catch off Key West, FL, in 1958, 1983, and 2007  The picture below shows the habitat of the tiger in 1850, 1950, and 2006.  These pictures make it real to me, more than the statistics, charts, and graphs.  It’s really happening.  Some of the damage was done while the boomers were kids, just because there were so many of them, but most of it was done after they matured and came to power, when those numbers could have been used to prevent further destruction.

How did this happen?  We cannot plead ignorance.  Plenty of people knew, and plenty were screaming about it by 1970.  Rachel Carson’s book The Silent Spring was published in 1962 and after that the reality was there to see for anyone who cared to see it.  By 1970 what was going on was well-known; in that year the EPA was founded and the first Earth Day was celebrated.  1970 was big in popular culture too: Joni Mitchel’s 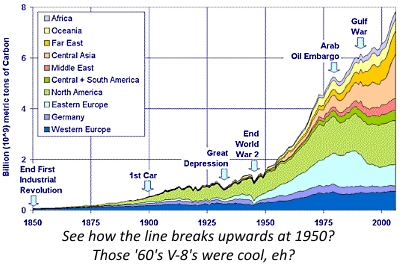 song “Big Yellow Taxi,” with the lyric “Pave paradise and put up a parking lot” was published, and Neil Young’s After the Goldrush was released, with its lyric, “Look at Mother Nature on the run in the 1970’s.”  So people were aware and it looked like things might get better.  By 1978 the horror caused by the toxic waste dump at Love Canal in NY was understood, along with other toxic waste sites that were literally poisoning American children, and in 1980 President Jimmy Carter signed legislation creating the Superfund program to clean up the worst of these sites.  But also in 1980 the empire struck back and darkness fell on the land.  Greed, selfishness, exploitation, materialism and irresponsibility came back into fashion.  Consumption was glorified and “tree-huggers” were ridiculed.  We went on a 30-year binge of gluttony and denial.   During this time corporations increased their power until today their money runs America.  Multinational corporations evolved to avoid supervision by any one national government. If the U.S. is no longer the world’s largest polluter, it is because we have exported our dirty manufacturing to China, but U.S. corporations still profit and the Earth still suffers.

Where are we now, after the binge? Here are some of those statistics.  As a result of deforestation 75-80% of the world’s natural forests are already gone and the area of tropical rain forests has decreased by more than 50%, from 6 million square 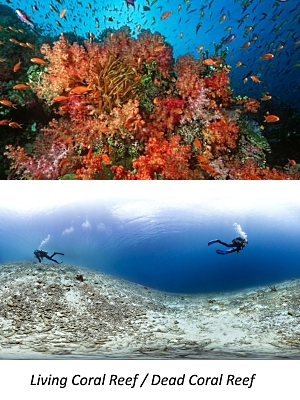 miles worldwide to only 2.4 million square miles.  These forests are the lungs of the planet, inhaling and holding carbon dioxide and exhaling oxygen.  As a result of the warming of the oceans and their acidification from CO2 emissions, 25% of coral reefs are already destroyed and 70 percent are at risk by 2030.  And get this, that 70% assumes “an ambitious mitigation scenario for greenhouse gases.”  Do you think that is likely?  If we continue as we are, all of the coral reefs will die.  The coral reefs serve as nurseries for marine life (in addition to being beautiful).  There is a problem with fresh water also: the Ogallala aquifer is sinking a foot per year, and has for the last 50 years—already some areas that pumped that water can do so no longer.  That is the aquifer under the fertile farmlands of the Great Plains.  Additionally, the Colorado River, which carved the Grand Canyon, no longer even makes it all the way to the sea.  Finally, it is pretty much a done deal that all of the large animals will be extinct in the wild within a few decades.  Elephants, all of the big cats, all of our cousins 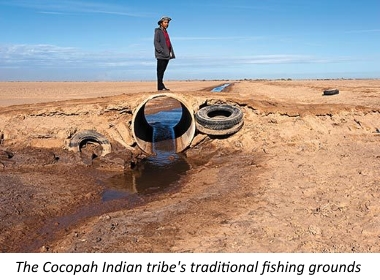 the great apes.  Enough.  Are we really going to leave our grandchildren a desert planet, with no forests or coral reefs, and no free animals?

It seems hopeless. On the other hand, the baby boomers still have their numbers, and now they have 40 years of knowledge, experience, and skills.  Plus, they don’t have to go to work for 8-10 hours per day.  Many of us will have 10, 20, or even 30 years of activity left.  What are we going to do with that time that would have more value than working to redeem the damage that has been done during our lifetimes?  Will we show the courage, wisdom, vision, and leadership that is expected of the elders of a tribe?  The politicians will not do it.  The corporations will not do it.  It will not be done unless we do it.   One person in that situation, bright, educated, committed, retired, can do a significant amount to pursue justice and alleviate suffering.  I know that because I have an old friend who does, and she gives me hope.  What could 3 or 4, or 500,000 do?   Seventy-six million children were born in the U.S. between 1945 and 1964.