I met Paul the first day I moved into the neighborhood. I was unloading the truck by myself and a burly fellow walked across the street and introduced himself as Paul; he asked if I needed any help unloading. I did, but P 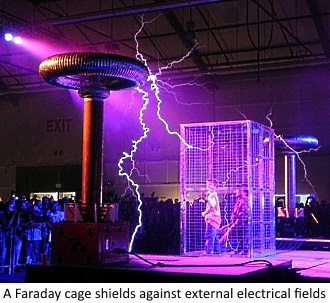 aul was wearing some kind of brace under his shirt. “No,” he said, “it’s not a back brace; it’s for something else.” After he helped me get the washer and dryer in the basement, we chatted briefly. I complimented him on his front yard garden; in addition to quantities of the normal vegetables, he had a peach tree with peaches on it. I had seen these in Georgia, I told him, but never so far north. We also talked about the heat and the growing season here. It used to be better, Paul said, but lately the weather had become increasingly erratic, with unnatural hot spells, even during the winter, and late freezes.

Our house was between Paul’s and the mailbox, and since we sat on the porch a lot and he mailed a lot of letters, we visited often and got a closer look at the paraphernalia he wore. Coming out of his shirt, apparently connected to the brace, clipped to his hair and wrapped around his wrist, were

grounding wires like one wears to work on computer components that are sensitive to static electricity. We never asked specifically, but evidently the equipment had something to do with protective countermeasures he was taking against psychotronic attack, surveillance or interference, the same interference, it seemed, that was wrecking the weather. That weather gave Paul hell trying to keep that peach tree alive. Even though he kept it covered, the winter hot spells would encourage it to grow and then get blasted by a freeze.

Late one morning I was working at the computer when my wife went out for a walk. She returned almost immediately because our street was blocked at both ends by police. There were also some police cars and vans in front of Paul’s house and the cops asked people to evacuate the houses on both sides. Soon they brought Paul out and took 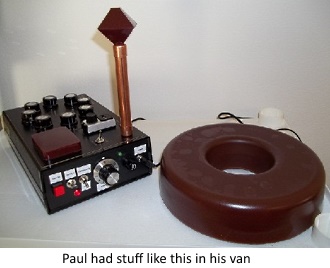 him away; he was gesturing and animated, but didn’t seem especially upset. The bomb squad truck showed up and its occupants disappeared behind the house. Reasonably quickly, as such things go, they brought Paul back. He and the cops stood around out front while the bomb squad milled around. And then everyone left. Evidently, someone had seen some of Paul’s anti-psychotronic equipment in his van and called the police to report another unibomber. I bet that gave the first cop who saw Paul with his harness and wires something to think about.

A couple of months later the cops came again, with a firetruck and ambulance. The firetruck left first, and then the EMS people came out and left. Two police cars stayed, with officers standing on the porch. I was pretty sure what it meant. Paul had been having trouble with his voice, and my wife had seen him the night before and said he was very sick. When he didn’t answer the phone or the door, our neighbor Mary had broken in and found that he had died, sitting in his chair, peacefully as far as she could tell. Of course, his friends had tried to get him to the doctor, but I believe he thought they would implant some secret technology that would make him crazy.